In the next few posts I’ll be discussing a model of the psyche presented by Joseph Campbell in his lecture series, Mythos. It’s important to note, that while he draws extensively from Jung, he explains that he does not do so because Jung is the “final word” on any of this, but only because he has the most “suggestive” ideas. Likewise, the concepts discussed here use Jung only as a framework, a starting point, and many of these concepts depart from, or expand upon, Jung’s definitions. This is not meant to be identical to, and certainly not a substitute for, Jung’s teachings. Nor are the ideas presented as fact. The world of mythology is itself only an allusion, and discussions of it are best left with at least one foot in mystery. So, take these posts as suggestions only, not law.

This is you, and everyone you know: 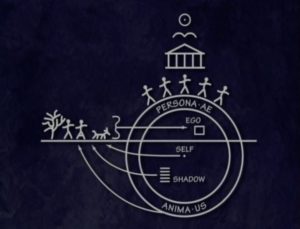 For the soul is a circle, as Plato declared. The soul is also what is so often missing from modern interpretations of the hero’s journey. Eviscerated of its depth, the hero’s journey has become a checklist of empty actions for the protagonist to complete, and little else. We have gone deaf to the call of the journey in our own lives. The grand sweep of the cosmogonic cycle moved toward the dissolution of the world back into the eternal realm. Likewise, the hero journey itself calls us back to this transcendent source. The journey is meant to be a guide to rediscovering our true identity, not a bankable story model. This quest has much in common with Jung’s process of individuation where one learns to accept and assimilate the whole personality. But like the hero’s journey, it is not a path to be taken lightly. As Jung explains, individuation “embraces our innermost, last, and incomparable uniqueness, it also implies becoming one’s own self.” This all-encompassing embrace of the self requires a journey into our rejected selves, and perhaps most importantly, our own pain.

Today, the hero’s journey has become nothing more than an empty story structure, a model to be strictly followed. It has, therefore, begun to fall out of favour among writers and critics who label it as “boring,” “predictable,” and “formulaic.” This is, perhaps, a good thing: a sign that the intuitive powers of the self recognise our modern concept of the hero’s journey as hollow. When it first emerged in the guise of a story structure (decades after the original publishing of The Hero with a Thousand Faces), the journey was falsely presented as a kind of guarantee a story would “resonate” with “power” and “captivate” the audience at a deep level. In other words: your script will sell, and the movie will be a money-printing machine. Campbell’s purpose was not, however, to make Disney more profitable. The hero’s journey can be used as the outline for an effective story (though it has also been the outline for totally useless stories, too), but it is vastly more.

Campbell’s model of the psyche (pictured above) describes the emotional process the hero undertakes: it is the beating heart of the outward “steps” of the journey itself, which are so often mistaken as the journey’s sole point. The hero does not, for example, simply cross a threshold into a “special world”: Harry Potter stumbling through the brick pillar in King’s Cross station to a world where magic is real. This is the moment the ego’s constricted perspective begins to break, and through its cracks, the hero becomes conscious of a new realm of possibility. He enters a world of emotional instability, threatening identity, and danger: he has never been here before, and yet it has been here all along, just beyond the eye. Crossing the threshold is the death of the old self; it is leaving behind who you have, until now, assumed yourself to be; it is the sacrifice, or perhaps the destruction of, the self you formerly wished to become. It is not simply finding a hidden door, it is encountering a hidden self.

The hero’s journey does not appear in every mythological tradition throughout the world’s history because it’s some shallow manifestation of humanity’s need for “entertainment.” Nor is the journey a symbolic rendering of a universal, moral lesson (in fact, the true journey obliterates the very existence of morality). It is, if you are willing to heed it’s threatening call, a guide to the realisation of your own soul. The cost is simply everything in your life – potentially your life itself. For as the journey lights the way to vast inner potentials and gifts, it also brings about the harrowing destruction of the ego. It is the promise of both rapture and pain, and it’s ultimate gift: the way “to participate joyfully in the sorrows of the world,” for this is the true meaning of peace.

I present this model of the psyche to reintroduce the emotional integrity of the mythology of the journey. It is not meant to be a prescription for writing the next Star Wars. Rather, it is meant to shed light on one of mythology’s core functions: to serve as a guide to navigating one’s own life as it’s lived in the trenches of everyday experience and strife. For this is the foundation upon which the hero’s journey (and Star Wars) stands.

Mythology and the Psyche Series (links will be added as articles are posted):
The Self and the Ego
The Persona
The Unconscious
The Anima/Animus
The Shadow Part 1; Part 2; Part 3
Projections
The Sun Door

← The Cosmogonic Cycle: Dissolutions Part 2
Through the Looking Glass: The Self and the Ego →

7 Responses to The Soul is a Circle: Mythology and the Psyche