Three years before D.W. Griffith would be immortalized with his epic Birth of a Nation, and a year later, Intolerance, he directed a one-reel curiosity named The Musketeers of Pig Alley. It may not depict the “birth of a nation,” but it is, rather, the birth of the gangster film. The Musketeers of Pig Alley is the very first movie to feature gangsters, organized crime, and bears the seeds of many of the genre’s most iconic elements. 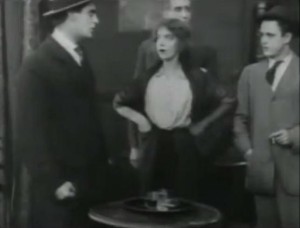 Starting with its sets. The film takes place in “New York’s other side,” according to an intertitle, and the locations here are cramped, dirty, and threatening. In fact, the sets are so crowded and claustrophobic that it may come as a surprise to hear most of the film was actually shot on location in New York’s Lower East Side. While the sets certainly have the unmistakeable feel of realism, one could be forgiven for thinking they are constructed: all the action takes place at ground level at the foot of buildings, and the sky is never seen. This is a point where the gangster genre developed passed The Musketeers of Pig Alley: there are no high level aspirations for the Snapper Kid and his cronies here, just the day-to-day grind of the gang. But the film does a great job of crowding the streets with figures, at times it feels like too many people, and our characters are often squeezed together at the edges of the frame, creating a real sense of the impersonal nature of the city. 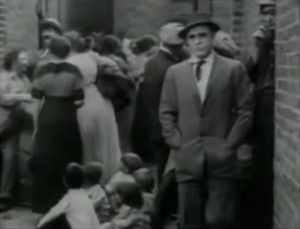 Griffith is often credited as the father of editing and the grammar of film. He used techniques like close-ups, masking, and irises to innovative narrative heights, and pioneered cross-cutting, a technique which is a backbone of modern film. While Griffith’s deep influence on continuity editing is largely credited to Birth of a Nation, The Musketeers of Pig Alley features genuinely inventive shots. As if to tip-off the marginalization of these gangsters and their milieu, Griffith has them creeping up and down walls almost always along the extreme edges of his frames. The most notable instance, however, is when the Snapper Kid and his sidekick creeping up the side of the frame towards the camera into a startling close up. 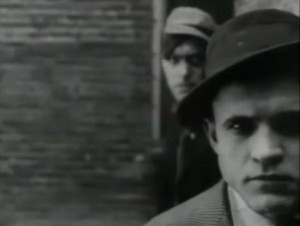 But Elmer Booth’s Snapper Kid is easily the film’s greatest achievement, and he is the shadow of every gangster to come. Snapper Kid is bold, grabbing Lillian Gish’s “Little Lady” and demanding a kiss the first time he lays eyes on her, a ruthless thief, attacking The Musician and stealing his wallet, and quick to violence. He’s also downright likeable, even charming. Booth’s performance is brimming with style, from the way he walks, his gestures, to the way he tips his hat, Snapper Kid is an incredibly full, developed character for a 17 minute film. And like his gangster ancestors to come, he is full of contradictions. While a creature of the underworld, he still protects Gish from a rival who drugs her drink, and at the close of the film when he demands her affection in return for his saving her, she points out that she’s already taken by The Musician. Rather unexpectedly for such a dangerous man, he shrugs in bemused acceptance and laughs at her inexplicable choice. While a more light-hearted turn here, the inevitable failure of the gangster as a romantic partner is a deep pattern of the genre. 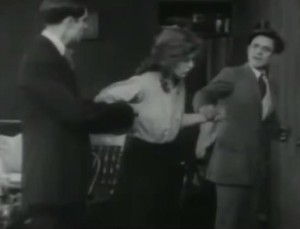 There are more hints at the rising genre: here we see a “Gangster’s Ball,” a nightclub and bar brimming with dancing couples and underworld characters. There’s also a confrontation between gang rivals which escalates to an ambush which erupts in a street shoot out. The Musketeers of Pig Alley is also relatively free of a police presence or any sense of the law. The social order of the alley has almost no relationship with the rules of polite society. While cops do appear near the end to break up the gun fight, their influence isn’t feared. When Snapper escapes the clutches of an officer at the shoot out, and is found later, Gish backs up Snapper’s alibi that he was visiting them and so couldn’t have been involved – a “good turn” returned for his protection. The hapless cop has no choice but to take them at their word and departs.

One thing you won’t find here, though, is the most enduring motif of the gangster film: the gangster’s inevitable death. Not only does Snapper escape retribution, after the cops exit, Snapper is mysteriously handed money by a pair of unknown hands from the edge of the screen. This is, of course, 1912, a full 20 years before Howard Hughes’s Scarface would be edited, re-edited, re-shot, and condemned under the increasing tyranny of the Hays Code for its moral outrages. It’s also a sight less existential than many of the gangster tales we’re familiar with, but as the beginning of what is definitely my favourite film genre, The Musketeers of Pig Alley is an important entry in film history, and worth a watch. 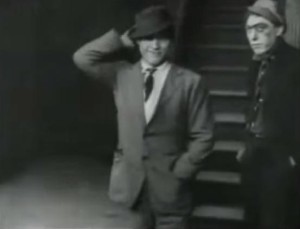 Bonus points if you can spot the reference to it in Hughes’s Scarface.

One Response to The Musketeers of Pig Alley: Birth of a Genre