I really love Equilibrium. It’s certainly not in danger of being called perfect, and there is a surprising amount of nastiness towards it on its imdb forum, but it does something very few other action movies do: it not only notices, but appreciates, the ordinary. Equilibrium takes place in the fictional city of Libria, a fascist state founded by the survivors of the Third World War. Believing a fourth world war would destroy humanity, the survivors realized the source of all crimes, discrimination, and cruelty was human emotions. Thus, the citizens of Libria agree to inject themselves with the drug Prozium, which neutralizes emotions (or at least, it eliminates the highs or lows of emotions). In order to avoid tempting Libria’s citizens to stop taking Prozium and begin feeling again, all art is banned, and so the resistance fighters often hoard art of any and all kinds. The story itself centres on Grammaton Cleric John Preston (Christian Bale), a specially trained police enforcer who investigates and arrests those who are rebelling against the state and have ceased taking Prozium (referred to as “sense offence”). After accidentally missing a dose, Preston regains his emotions and begins to question the established order. 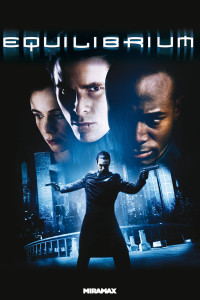 On its, very limited, theatrical release Equilibrium was critically panned as a tired, re-hashed sci-fi movie. Part of the reason was it was released in the long shadow of The Matrix (which I also love with all my heart). And honestly, they are not unrelated. Like The Matrix, there is a strong influence of the martial arts in Equilibrium‘s fight sequences, and some of the gun fights bear resemblance to those in The Matrix‘s third act. Both films ask questions about human nature, the value of individuality, what it means to be truly authentic, and our sometimes voluntary relationship to oppressive forces. None of this is to say Equilibrium is an outright copy, but it certainly suffers for the comparison. Audiences, however, tend to like Equilibrium and it has since attained cult status with its fans. Between critics and audience members, there is a very wide gap: on Rotten Tomatoes the average critic rating is 38%, while the average audience rating is 82%; the gap is similar on Metacritic where the critic average is 33%, and the audience average is also 82%. Strangely, this gap in opinion may actually be fitting since the film makes a bit of a joke about the distinctions we make between “high” and “low” art.

At the very beginning, the first rebel holdout Preston and his partner, Errol Partridge (Sean Bean), raid is hiding what we’d normally consider “high art.” In a room full of paintings, a rebel looks at “The Story Book” by William-Adolphe Bouguereau (several of whose paintings have sold in the millions). After the violent confrontation, Preston uncovers a hidden compartment under the floor which is hiding nothing less than the Mona Lisa, which, after being authenticated, is burned. Subsequent raids yield rather less impressive results. The hidden room where Mary (Emily Watson) is hoarding contraband has two kinds of ugly floral wallpaper, lamps with brightly coloured shades, a ripped quilt, a little bell, and funky shaped glass vials. In another raid Preston finds a sign for Gold Bond Stamps, a school crossing traffic sign, matches, postcards with pin-up girls on them, more coloured glass containers, a rotary dial phone, Christmas lights, a disco ball(!), and a snow-globe with the Eiffel tower inside. None of this would be identified as art at all. In fact, the only other appearance of “art” in these raids is when Preston plays a recording of Beethoven’s 9th symphony and is totally overcome with emotion (but Lord knows Beethoven’s 9th was criticized when it was first performed publicly, too).

What we give the title of “art” to is not just highly subjective but fraught with all kinds of briar patches about what constitutes “talent,” “worth,” and “importance.” But the things in  Equilibrium aren’t banned because they are considered art, they’re banned for “emotional content.” In the film this is defined as “all those things that might tempt us to feel again.” To writer and director Kurt Wimmer’s credit, the things that may tempt us to feel aren’t just the Mona Lisa or any other painting that belongs in a museum, but anything with a bright colour, a strange texture, an unusual shape. “Emotional content” is not a value judgement. It makes no divisions and assigns no labels. A snow globe delights in its own way, it may not be the sublime rapture of Beethoven, but it is still delight.

Aside from a scene involving dogs which cannot be described as anything other than emotional blackmail, Preston’s discovery of emotions does not focus on grandiose sensations – in fact, the “spectacular” elements of the film, the fight sequences, are associated with a lack of emotion in Preston. Instead, Preston seems to notice the things already around him. The first thing he notices is the warmth of the sunlight – which turns his skin from a stony grey to a warm beige – and he peels the film from his window and for the first time notices the beauty of Libria in the rain. The same day, while climbing a staircase in a thick crowd, Preston notices an older woman beside him running her bare hand along the plain, metal railing. Preston then takes off his own glove and does the same, almost surprised at the sensation. He does something similar later, when after another raid in the nethers, he walks along a deserted and bullet-ridden hallway, removes his glove, and runs his fingertips along the wall. At work, Preston notices the identicalness of everyone’s desk and, as Father’s voice in the background is heard toting the importance of “sameness” and the opportunity for every citizen to live identical lives, Preston rearranges his stapler and paper clips with the intensity of someone defusing a bomb. Preston’s emotional trajectory in the film is represented by a simple, tattered red ribbon. And in flash back, Preston remembers his wife, who unbeknownst to him had ceased her Prozium doses, as she folds clothes with an almost reverent quality, as if it were the highest act of love possible – and in a way, it is.

It is remarkable that an action movie could remind us to reconnect with the everyday: folding laundry, where we put our stapler, the texture of the wall. If we could set aside our value judgements we might be more open to wonder. We live in a world that is quietly, but intensely alive, right underneath our fingertips. The simple sensation of a metal railing under our bare palm, or noticing the way sunlight warms the skin. And while the film may be about a society which voluntarily numbs their emotions with drugs, it also uses the potential intensity of simple things to underline, perhaps, how numb we are in our own lives. It would be a rare person indeed who considers folding laundry a sacred act. I love Equilibrium because it reminds me to wake up and look again. After all, isn’t the real purpose of art to help us see the world, others, and ourselves differently? Art gives us another point of view outside of the tyranny of our own. So what if the movie isn’t a masterpiece? We have only our dreams.